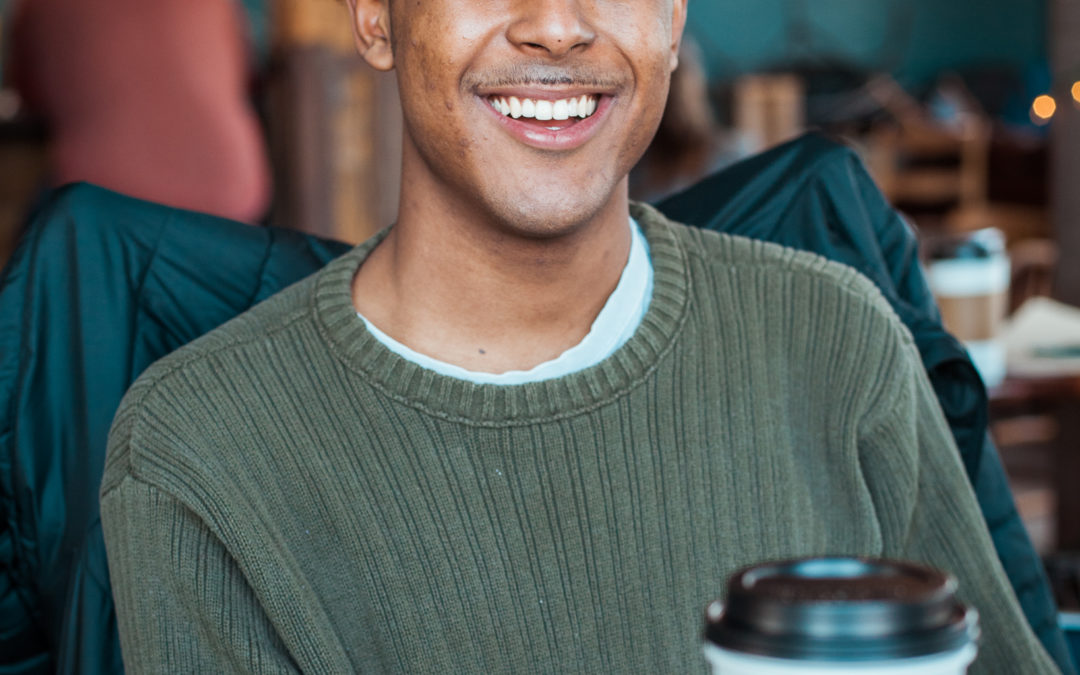 You can’t help but smile when talking with Avrey Smith. It’s immediately evident how much he loves his life and his community.

A Grand Rapidian since birth, Avrey, was introduced to Roots by Hillary Morgan, a former barista at the shop. She was his Young Life leader at the time and then became his friend and mentor. He met with her at the shop, then started bringing his friends for some much-needed caffeine. “Eventually it just became the place to be.” He has been a barista at Roots since July.

Avrey is currently studying pre-communications at Grand Rapids Community College. He laughingly revealed, “I am definitely not good at STEM.” (Science, technology, engineering, and mathematics). We got talking about the pandemic and how it changed life for him. “It was a pretty rough year. I’m an extrovert. I gotta go do something, I gotta go interact. A lot of the structures I usually had and relied on were just gone. But it was a good year to understand where I was at and where I wanted to go and who I wanted to be. If it wasn’t for the year, I wouldn’t have moved out or started at Young Life.”

When the pandemic hit, Avrey’s oldest brother, Christian, was living in Chicago and needed to move back to Grand Rapids. Avrey and Christian decided to move in together. In a matter of days, they found a place, Avrey moved out of his parent’s house, and into his very first apartment a few blocks from Roots. “You just wake up one day and you’re there. You are doing it!” Avrey spoke about how much he loves living so close to Roots and on the westside.

When he’s not studying or working, Avrey loves to be with his friends. He says it may surprise people but he is a “huge geek” and has a large collection of comic books and trading cards. Most nights, you can find him playing Magic the Gathering with some friends. But he isn’t partial to just Magic, he’ll play just about any card or board game as long as it involves friends.

When asked what makes Roots special, he said it’s the people. “Roots has helped me find my community. A lot of hip, young people like to hang out here. Knowing the staff, seeing different faces, and connecting with different people in the community is cool. And just to have this one spot that I’m so close to and able to rely on… I guess it’s hard not to see this place as amazing.”

When we spoke about what’s next for him, he told me about a piece of advice he’d been given.  “Accept that your path is your own path.” During his freshman year, he was feeling down and his mentor had spoken those words to him, “I’m more of an individualist and I can go my own pace and that is okay.”

Today is Avrey’s 21st birthday! Be sure to wish him a great day!!

A book you’d recommend to others: Scary Close by Donald Miller

Person who can make your day better: My mom. This is the only answer. I’d be doing a disservice if I didn’t give her a shout-out.

Favorite thing about yourself: I am really liking my hair right now.

Build your favorite meal: Pizza rolls and a nice glass of chocolate milk. I don’t think you need anything else. I think that satisfies the whole pyramid right there.

What’s something you’ve learned this year? Help is great. It’s so countercultural to ask for help.