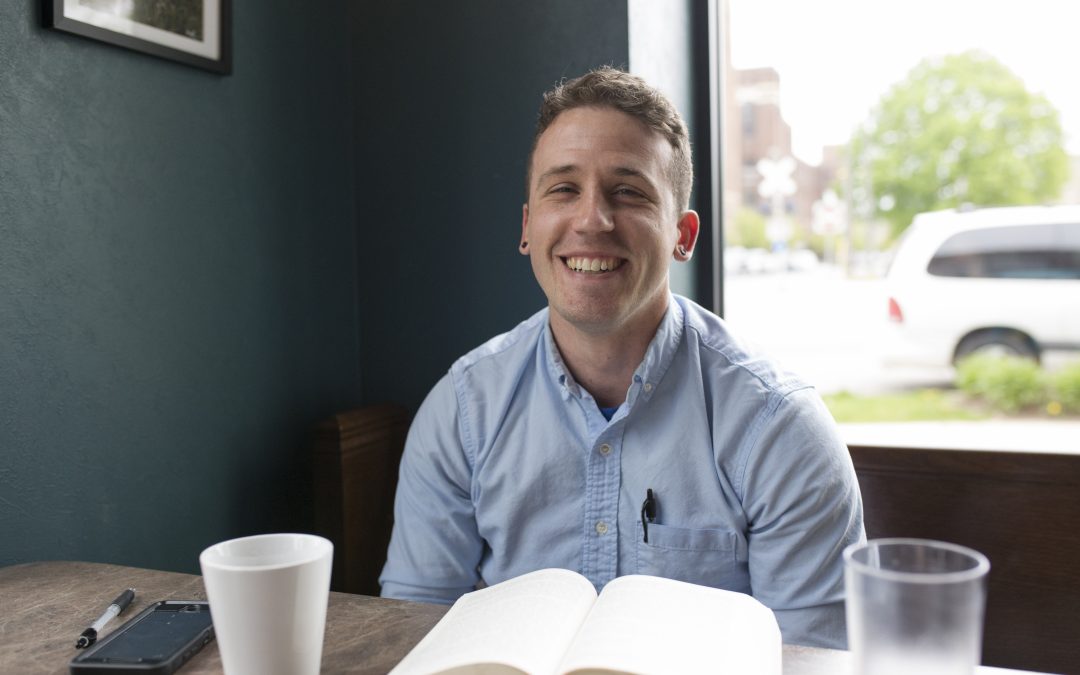 We want to introduce you to one of our friends here at Roots, Scott Biggerstaff.

Sum yourself up in two sentences.

If I were to describe myself, I would use the word “gumption.” Gumption.

I’m not sure you can modify it to make it an adjective. Unctuous? Haha, no. That is way off.

Failure, I guess. That seems like a stereotypical answer for that question. But, I think just generally, just taking risks and falling short a lot. Just being reflective, I guess, and taking failure as an opportunity to grow.

If I could Identify with one, uhhh, Sam Wise from the Hobbit. I’m not sure how much we have in common but I like him a lot.

What does joy mean to you?

What does joy mean to me? I would say it’s a willful, rosey outlook choice to see and facilitate brightness.

I have a friend, Mike*, who has chronic headaches and is in a lot of pain pretty often. He was pretty depressed for awhile and has talked about the constant daily need to choose joy, to be excited about his life; the things he gets to do and the people he encounters. I haven’t ever really given a whole lot of thought to what joy is. I think it’s important to choose but I don’t think it’s a concept I’ve ever really tried to define.

Have you ever seen the movie Zoolander? That’s not what inspires me, but there’s a part where they ask Hansel “What inspires you?” and I think he says “Sting,” the artist and that it’s not that he necessarily listens to his music but he’s inspired by the fact that he makes it [music] and I think that’s pretty funny.
I think I’m inspired by people that are better than me at things. Like, it pushes me to work harder and read more, engage more thoughtfully.

Probably the friends I’ve made here. That feels pretty cliche, but I’ve met a lot of cool people who are very welcoming. I think maybe the most endearing thing about good friends is how much they like you and how much it’s surprising by how much they like you. I’ve made friends and I’m like “man, these people, like, really like me and I don’t get it.” So I think that. I’ve made a lot of friends that really like me and it makes me feel really warm and fuzzy inside.

Why did you choose your profession?

Honestly, I was really into the show House at the time and the show Scrubs. So, it was basically tv. You’re not supposed to say that when you interview for med-school.

*I, who didn’t know you had to be interviewed to get into med-school, asked about that*

They ask you questions about how you had an interaction with a physician who showed you dignity and passion or “how you want to help people.” And while all of that is true, I want to help people, the real inspiration was liking House and Scrubs.

Do you enjoy what you do?

Yeah. I mean, I’m not doing it yet but I think I will really enjoy it. I’m beginning to enjoy the studying. It’s hard to learn something that is so broad, something that you have to lay such a big foundation for before you can even start doing it. You know, when you learn anything you sort of attach this scaffolding that you sort of already have. Learning is sort of building off of something you already know. So in medicine, you need a huge base of biological, chemistry knowledge and then you have to tack on top of that all this physiology, bio-physiology, all these concepts from physics and this patho-physiology stuff which is a lot of micro-biology and there’s so much of it that it takes awhile to establish that scaffolding to appreciate and enjoy what you’re learning and to think new things. Because mostly you’re just trying to transfer things from all of the books and teachers and online resources into your brain and they just all tell you what to think and what to know and so at a certain point you begin to decide for yourself what’s important, beyond that, and then you can start to learn and invest energy in a way that’s a little more satisfying and not as punishing. I think I’m getting to that point and I have no reason to be studying right now, but I do it, because I want to be good at what I do. It’s inherently rewarding to learn this stuff and to lock it away and know it well enough to be able to improvise and think new thoughts.

Outside of medicine, what are other things you are passionate about?

I became a Christian through Young Life in high school and I wanted to pay it forward in college and I became involved in youth ministry and got really into mentorship. I had a small group of guys that I started leading when they were in the sixth grade and then led them all the way through their senior year of high school. So, I’m pretty into that. Soccer, I love some good soccer. I love coffee.

I listen to my discover weekly on my Spotify right now. I don’t really know many of the bands on there which is kind of the point but I’ve been listening to some ambient stuff. I think the last couple of albums I bought were:

We Got it From Here…. Thank You 4 Your Service– A Tribe Called Quest

A Seed at the Table– Solange Knowles

What is your favorite thing about Roots Brew Shop?

At Wednesday wine night, I told Mallory and Hillary a list of why it’s a good coffee shop. I think I talked about the outlet situation. I just like you guys, coming in and knowing the people behind the counter. It’s like coming into your home and being made a cup of coffee so I can read and study. That’s probably my favorite part.

Scott has now moved to Kansas City to begin his residency work. He was such a joy to see in the shop and to visit with. He also always wore stellar socks. Thanks for all your visits and great conversations, best of luck to you Scottie!!