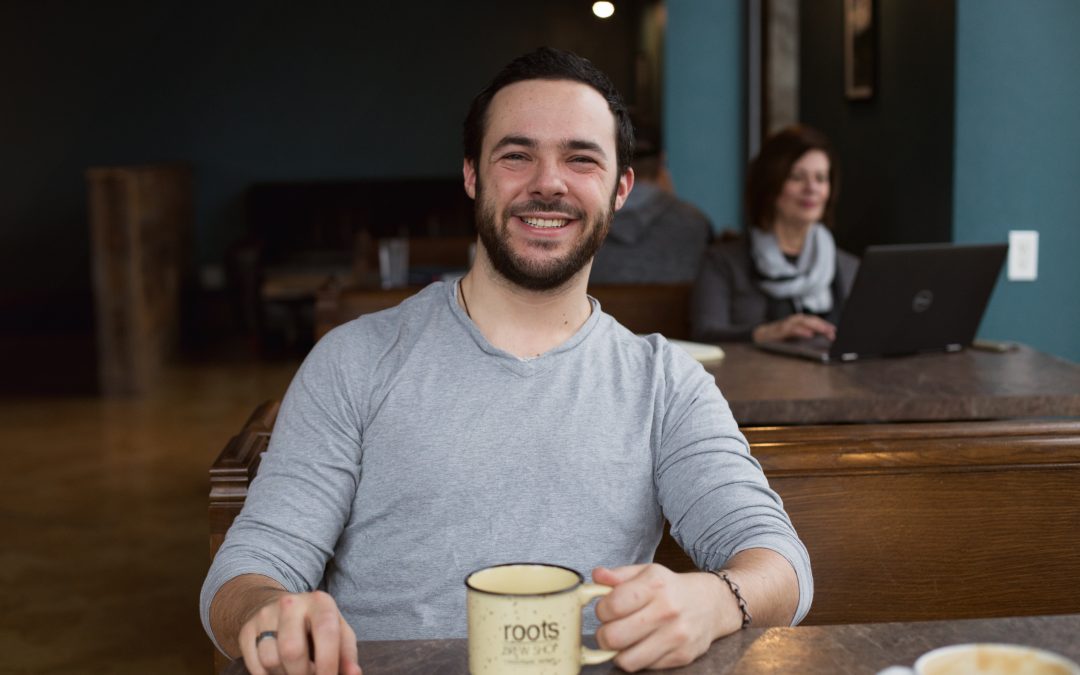 If you haven’t met Andrew yet our guess is you will soon! He hangs around Roots and various coffee shops regularly. He’s got a great creative mind and a big heart. We sat down with him and asked a few questions:

I am a child of God. I cannot be described in two sentences.

What is your profession and why did you choose it?

When I was younger I would make stop-motion, clay-mation videos with my dad’s camera. I would draw and use my hands, I just really enjoyed the creative stuff. I see different visions. I see scenes, or camera angles. Watching cartoons, it wasn’t just about the story lines. It was about the art style, the visualization. The way it looks is just as important as the plot. For example, the Batman animated series really hit me.

But, how I know that this is what I was meant for was because it was a calling that just never really went away. It’s always been apart of who I am.

Andrew went to school for medical, theology, business and marketing studies (Aquinas college for studies), and went on to an internship in Chicago, moved to Detroit and worked in the radio business, moved to Grand Rapids and became a server and came to the conclusion that, in the end, this is what he was made for.

My mind works so differently than other peoples. What comes so naturally to me is so hard for so many people. I just know I was built for it.

Absolutely. Becoming a freelance artist, getting into the creative profession because it could have totally bombed. I had absolutely nothing to go on. For years, I tried to shake this but I can’t because it’s a part of who I am. If I was a betting man, the odds would not be in my favor because I didn’t go to school for it. Some of it was luck but the people in my life helped me get here.

If you could only keep five possessions, what would they be?

Recently, it’s called “Arrival.” There are movies and then there are actual pieces of art and this one is a masterpiece. It’s beautiful because it starts conversations, art is supposed to take you beyond itself. True art and true beauty goes beyond itself. This is something that is really cool because it was masterfully done. Everything worked so well; the cinematography was stunning. I love a good story and the story was great. It is one of communication; it shows how important it is to understand what the other person is saying and how wrong things can go with poor communication.

What was your most embarrassing moment?

*chuckles* This may not be my most embarrassing moment but this is definitely AN embarrassing moment. When I was younger, growing up we grew up in the suburb and we lived in the more low-end neighborhood of these mansion houses. I was a freshman and I was picking someone up for school and I didn’t feel very good. I was driving and I was just like “I don’t feel very good” and my sister was just like “man,  are you okay?” and I just pull up into a mansion’s driveway and I just hurled all over my lap. I couldn’t just throw up all over myself and I started throwing up on their driveway. I called my mom to come pick me up,  and she, being the good mom she is says “strip your pants off.” I was like, “what, are you crazy?” and she responded “Strip off your pants and get in the trunk [of the mini van]” and so I took my pants off and had to walk in front of all these cars with my pants off.

Oh my gosh. My favorite thing about Root’s is that they don’t try to be so perfect and I think that’s what I really love about this place. It’s like your living room. You’ve got mixed matched chairs; it’s got a very homey feel, a warm feel to it. It’s got a lot to do with Mallory and an expression of herself and how it all leads into every part of the shop. It feels like your living room. There’s a difference between a house and a home and it feels like a home. A house is sterile and lifeless and a home is full of life and this feels like a home.