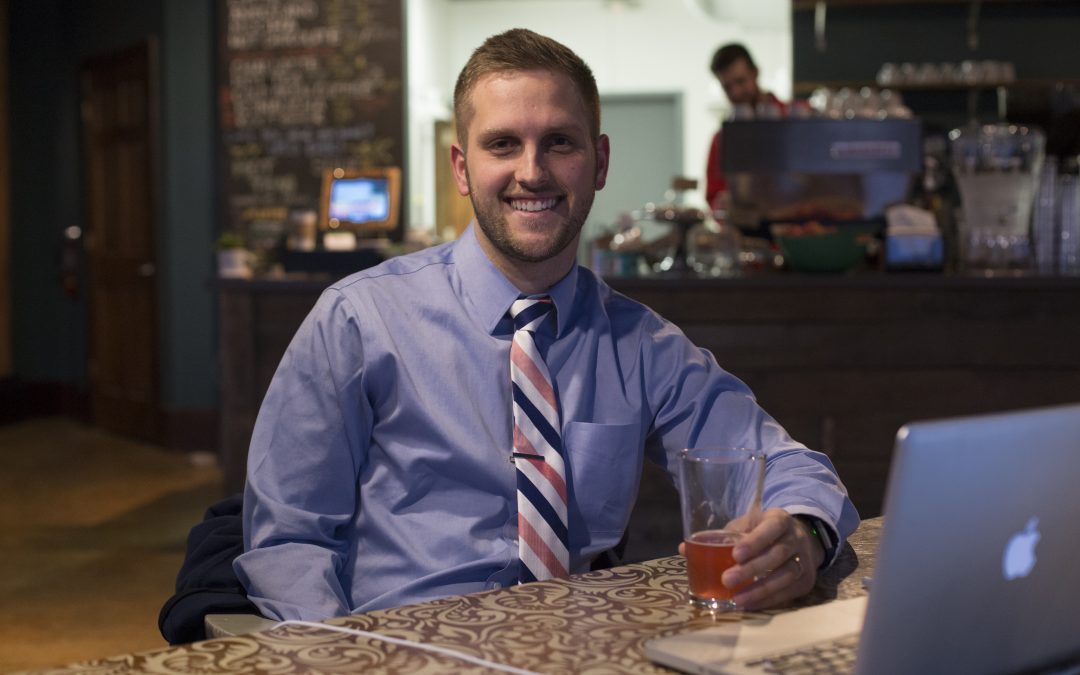 Hey Everyone, meet Nate. He’s been with Roots since we opened. He has used this shop for many study sessions and is on his way to being an amazing doctor. You can usually find him drinking a cafe miel (he’s been working on getting it put on the menu as Nate’s Cafe Miel) or a kombucha. We sat down with him and asked a few questions.

Describe yourself in two sentences

I am a guy who is driven and passionate about medicine and my family. I’m doing my best to honor Christ as I strive to be a good husband, doctor, and friend. Boom mic drop!

If your house is on fire and you could only grab your backpack with only five possessions in it what would they be?

I’m not a very ‘thing’ oriented person. These are some hard questions, I’m loving it!

Okay so my possessions would be; my laptop, my and my wife’s wedding rings, (“That’s good. My wife will like that one”), my guitar, my blue suit, (It my favorite suit and it’s the suit I wore for my wedding), and MacAllan (scotch). Is that one a bad one, to take scotch? I just don’t know what else I would take.

Europe. I’ve never been to Europe. There are so many cool things in Europe. I can be more specific, Santorini, Greece. Because it’s beautiful and it’s in Europe.

What is the biggest lesson learned/best advice you have from marriage?

Communicate. I don’t know if that’s even something I’ve learned, but but more something I was told and I think my wife and I actually do that really well. It’s payed off time and time again. We communicate really well. Always be upfront and communicate. My wife and I tell each other everything and when I hear of couples who don’t it amazes me. When spouses aren’t on the same page on certain issues it’s hard to think of raising a family like that. You want to be on the same page for major issues. You don’t want to be the same person obviously, but you want to be going the same direction. In marriage you’re sacrificing a lot for the other person so you want to know what it looks like for your career, your current life ‘To Do List’, what goals you want to accomplish. If you aren’t on the same page with all of that or haven’t talked about it problems are just waiting to happen.

What does joy mean to you?

Joy to me is something that does not fluctuate depending on your mood. It does not fluctuate depending on your circumstance. At least not near the amount that happiness or a cheerful mood does. Joy for me is something that is an underlying perspective that you have on life. So for me, it is really linked to my faith. It is the framework from which I view everything. For me, a good day or a bad day, sure my mood will change, but joy is the basic underlying lens that I look through the world and know who I am and where I stand as a child of God. That’s my perspective of everything and my understanding of joy.

I could say getting cut from the basketball team my freshmen team in high school. Prior to that point I was destined for the NBA. Okay not really, but getting cut really shifted my perspective on things. I really thought I would make the high school team and ironically everyone thought that as well.  That forced me to be less passive about things and started to instill, and has continued to instill in me, a discipline of working hard and going out and getting what you want rather than thinking you deserve something because you showed up or because you’re there or because you exist really. I think that’s a problem in our society in general. People think they deserve things and that’s not the way the world works. Getting cut in high school really helped reshape the way I looked at challenges and dealing with things that weren’t going my way.

What is the biggest compliment you can give yourself and why?

It’s kind of weird but maybe that I’m willing to sacrifice, make sacrifices, for things I want or value in life. That’s a bit of a catch all, but yeah that’s what I would say.

That one’s easier. But there are a lot of things that I really like about Roots. It’s really cheesy but it’s true, it’s the people. There’s no other coffee shop that I go to where I interact with every one of the employees. Every time I walk in I know who’s working behind the counter and they’re always friendly. And I think it all starts with Mallory, too. I didn’t know Mallory when I first came here, my wife did and that’s why we came here. I’ve since had a chance to get to know her. She works a lot of long crazy hours and deals with all the stresses of managing business, especially a new business like this. I think, a lot of times, that flies under the radar, as far as customers like me who walk in thinking, “Oh she just hangs out here and makes coffee”. And I think it’s so much more than that and it’s more stressful than that, but you never see that. In her day to day interactions she’s always happy and always cheerful. Same with all the employees. To have a relationship with the people who work here is unlike any other coffee shop I go to for sure.