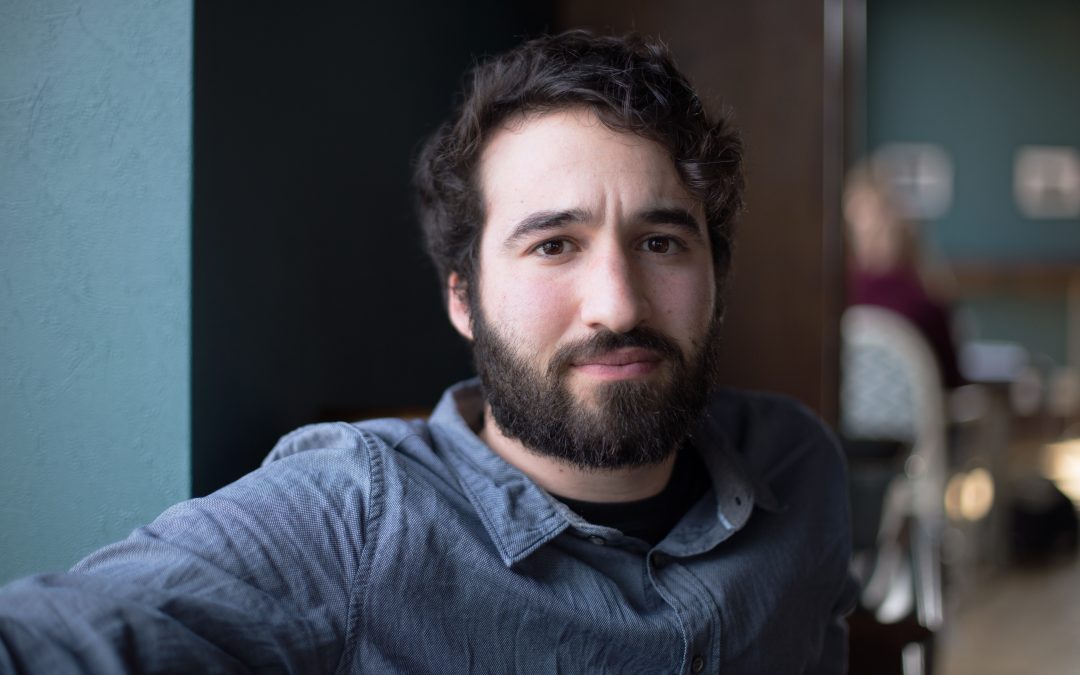 Hey Everyone, meet John Abraham. He is an exceptional young man and someone who has been involved with Roots for a long time. If you look carefully at one of our tables you can see a picture of him helping finish our floors. We sat down and asked him a few questions.

I think I like to wander a lot and in my wandering I found God. Now, He directs my steps.

Oh crap. These are questions I need to think about before I spew them out. *chuckles* I think because I just watched this series again, I’d say Dustin from Stranger Things. He’s the mediator and he thinks that Eleven is cool.

What is something that brings you joy?

So actually, my friend Erin and I were sitting on the other side of the shop a few months ago and she asked me what I was passionate about and I told her I didn’t really know because I feel like I’m the type of person who has their hands in, kind of, everything. Like, I don’t have my hands in just one main thing and then that night, God gave me a really peculiar dream and ‘it was me at the camp that I used to work at. I was just talking to these kids in this skate shed where we held the bikes and things and they were like “Dang! This is so cool!” and I was like “Dude! You guys don’t even know, we have to check it out!” and that thing used to be crazy but it’s all overgrown now. So I opened the back doors of the shed to where they used to have all these bike trails and I was expecting to see it overgrown, like plants, grass and trees. But when I opened the door, there were tractors and landscapists and I was just speechless. I was walking around and the kids were like “What? What’s wrong?” and I said, “Nothing. Nothing’s wrong. This is just so much better than what it used to be. And I feel like God was slapping me on the back of the hand telling me, “John, you’re passionate about things. You’re passionate about restoration and seeing people in their original design or watching people take steps towards their original design.” And so, moments like that bring me joy. When things finally make sense for people.

Cop-out answer is my mom. She recently retired and just sold her home and she is waiting for God to provide a job for her in New York so she can move to Queens to do homeless ministry. She wants to pick up everything she has and just go and to me that’s just incredible and inspiring. I probably talk to her multiple times a week, just about life, and she’s always, always encouraging me to strive after God. She’s okay with the fact that if the Lord calls me somewhere and I don’t come back, she’s totally okay with never seeing me again and that’s just super encouraging. Another person, Rebecca Hopson. She’s another person who is just a phenomenal human being to me. She’s constantly seeking the Lord and constantly waiting on Him. Being obedient to what she’s speaking and hearing. She’s also willing to speak that out over people and that’s really, really encouraging to me. Right now she’s in Mexico just being a missionary.

If you could trade lives with one person for an entire day who would it be and why?

There’s this guy named Shaun Hover. Shaun Hover is a professional [christian] skateboarder and he’s from my hometown. He is a missionary for YWAM [Youth With a Mission] Los Angeles with Calling All Skaters. He actually started Calling All Skaters. So, he and his wife live in Barcelona and they’re there for the year making sure that CAS Barcelona is up and running and things like that. I follow his social media and he puts his entire life on Snapchat because he’s like “Yeah, I’m a missionary and I want my followers to see what a life of serving the Lord looks like” and I just admire what he and his wife do and how faithful they are. It’s incredible. I love that man, he’s an inspiration.

What trajectory are you hoping to push yourself onto? Where do you want to head?

Along with the Lord giving me a lot of direction right now, which is beyond interesting. I’m at Kuyper College. I plan to graduate next April, Lord willing, and I would like to take a year off and go to Jerusalem University College in Fall of 2019 and pursue a master’s degree in Biblical History and Geography. And then, at some point after that, I pray that God will give me a job as a professor here in the United States or in Israel, I really don’t care. I’d like to take some time off between school and settle down with a job after graduating.

Probably all the natural light. *chuckles*  There’s actually a lot that I like about Roots. I think Mallory has a big pool in that. She’s a fantastic human being and I love that I was able to be a part of the process of watching her dream of one day opening a coffee shop and then actually being able to sit here and be like “Yeah dude, you did it.” It’s really encouraging to see all of this coincide with her faithfulness and patience and to see where this is all going. I like the location, the color of the walls, the blue and wood thing. I was telling somebody yesterday that it’s not like this place was intended to be a well for Christians but it kind of just happened; that a lot of christians gather here. It’s cool to be here and listen to all of the encouragement go on in hopes that it [those conversations] doesn’t deter other people but that it makes people question. It’s cool. It’s just a cool place to be.