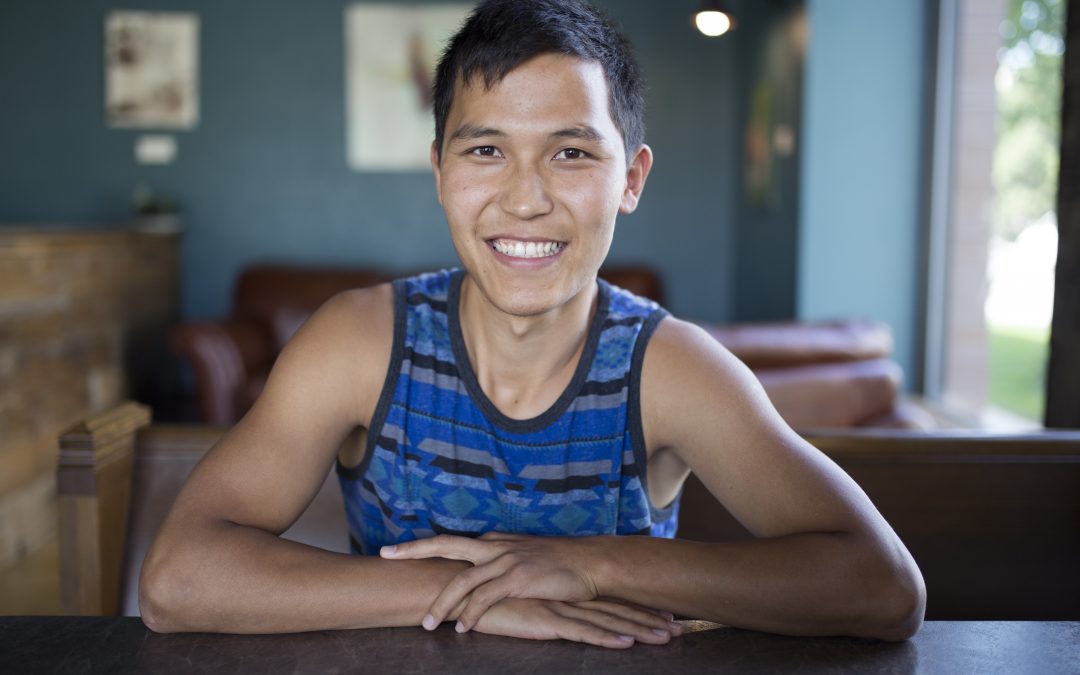 Hey Everyone, meet Aman. He’s from Kyrgyzstan and comes to Grand Rapids a few times a year. We have been fortunate enough to get to know him on his last few trips here. He is an inspiring young man who is working to make change happen in our world – all over the world. We sat down and asked him a few questions.

Describe yourself in two questions

I am a creative person who likes to develop creativity in others. And I love filmmaking.

Can you tell me a little about why you are here in America?

I am from Kyrgyzstan and I’m here because of my friend Gary. I got to know Gary when he came to Kyrgyzstan and he talked at and lead a conference there. I was an interpreter for him and his team. And since then I have gotten involved and am now a volunteer for his organization, Network-20 International.

My recent inspiration is this Russian writer, Leo Tolstoy. He really inspires me. I recently read his book Resurrection and now I’m reading his novel Anna Karenina. His work is very inspirational and his biography is very inspiring. He didn’t fear to live in the way that he thought we should live. For example he lived in the middle of the nineteenth century and the beginning of the twentieth century and in his time Russia was very much in a critical situation when there was a transition from monarchy to a communist system. He knew things were really changing and instead of just living as monarchy people did because he was a noble person from a noble background he chose to live differently. For example one of the things he did was sell all the things he had and gave to the poor or he use to own slaves and chose to free them. So many such noble things he did.

Swing dance on tuesday nights downtown. I really like to swing dance. I’ve gone almost every week I’ve been here. I especially love the dances where you switch partners you discover people. By the way they dance and move you can guess their personality types and their uniqueness.

Is dancing a big part of your culture back home?

Yes it’s a very big part of our culture. Of course it also depends on the person, but I am one who loves the arts, different types of art, and dance is part of it. And this is something I was to bring to Kyrgyzstan and to my community. So they can do different dances and swing dance on a regular basis.

What do you do back home?

Currently I’m in a position where I need to choose the city in which I live. I need to choose the exact area of my work. One of the areas I would love to be involved in is starting a creative center where people taught english through the arts; through acting and singing and dancing and filmmaking. It’s going to a place where people develop their creative potential. That’s my passion.

What is the biggest risk you have ever taken?

The first thing that comes to my mind is my trip to Tajikistan. That is the country south of Kyrgyzstan, they border Afghanistan, and that country is considered a very risky country. Especially the area we went to, it was a very mountainous area that borders Afghanistan, so there’s a lot of risk going there. My friend and I went to have fun and explore the country.

What is your favorite childhood memory?

Baseball. Every summer an American team from Texas mostly would come to Kyrgyzstan and they would organize a baseball league for us. And I really loved baseball and especially the way they showed love and care for us. That was a very big blessing. My team was Bulldogs and we were the champions. It was good.

Since I love traveling it’s a difficult question but I will try and choose a country. I think I will choose New Zealand. I was given a very nice book that would describe different island countries and I saw pictures of New Zealand and it was gorgeous and beautiful and I thought, “Wow, I should go there and see the country.”

What music are you currently listening to?

Recently I started appreciating the songs of Birdie, an indie/folk style. Especially her song Wings. Mostly I like acoustic music where there’s guitar, piano, and then the voice – very simple. I like the simple, it’s calming.

What is something you’ve always wanted to try but have been too afraid to do?

Afraid to do!? Usually I have no fear really. Rarely I will have a fear. If I have an opportunity [to try something] usually I will end up trying it. For example when we were in Washington DC last year there were some guys having fun wrestling and I asked if I could give it a try and they had no problem and let me join in. Would you go skydiving? Yeah I can go for that. I can just go ahead and jump if it is needed. I was actually known for my craziness in my neighborhood. For example there would be a four story apartment building and there would be a separate staircase that could climb in case of fire, but these staircases are very different from American ones – it just a ladder attached to the side of the building. I would climb up it and show off a bit. Aman is fearless.

I love the atmosphere of being relaxed. I can really just be myself. I can spend as much time as I want to just being here. I really like the music that’s played. I can remember writing down a number of songs that I have continued to listen to myself. Of course I love that I can talk to you and Michelle and all of the staff so easily and talk about many things and really be friends rather than just business. So that’s what I like and it makes this place very special. And I love the design – the mix of the old and new – it is done well. It’s kind of fun to be next to the railroad too. It gives it a feel of being in a remote place.