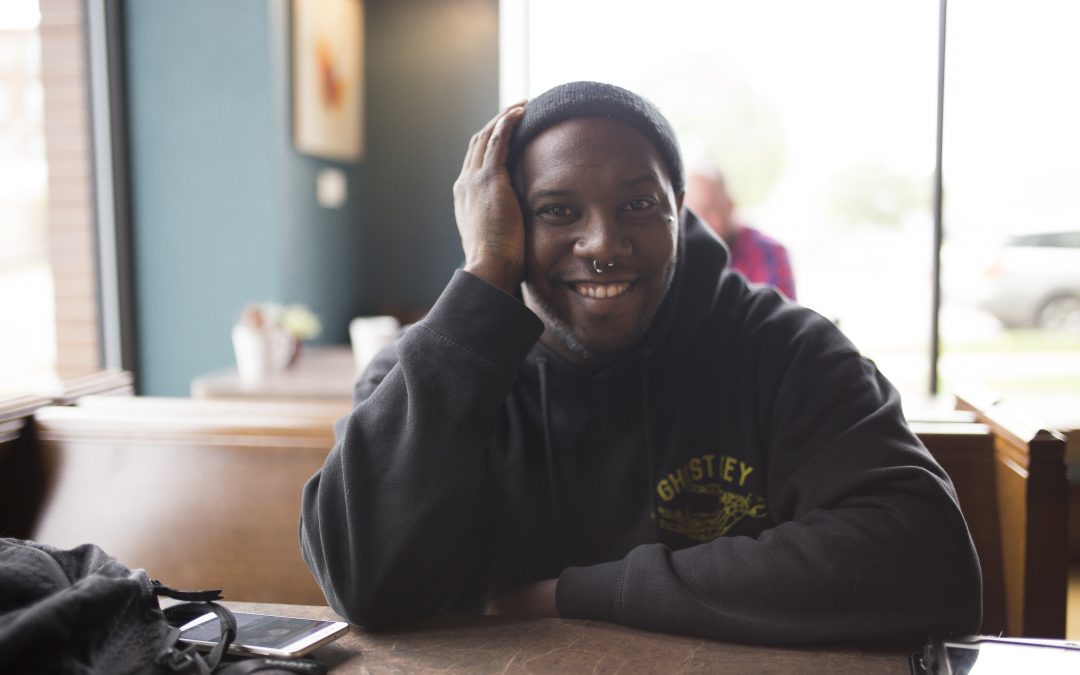 Hey Everyone meet Michael. He’s an original here at Roots Brew Shop. He brings such joy, peace, and calm to this shop. It has been an amazing honor to get to know him over these past two years. Your life is better when you know him. If you see him around say hello. We sat down with him and asked a few questions.

Describe yourself in two sentences

I only take a few things seriously because I like to act stupid and enjoy life. But, those few things are people, Jesus, and making sure people feel loved and cared about within’ my presence.

If there was advice you could give your younger self, what would it be?

I would say when I was a super young kid, “You will eventually be much cooler than you ever thought Matt Lambert ever was.” That was my best friend growing up and I felt like I lived in his shadow. As a teenager, “You’ll make a lot of mistakes, but at the same time you’ll look back on your life and enjoy all of it; even the hard moments.” For my young 20’s self, “Don’t date that girl.” It’s hard because I have really looked back on my life and I don’t really have many regrets. I feel that I’ve lived my life really as I wanted to and so I guess the only advice I would have for myself is to continue believing that you are exactly who the Lord wants you to be.

If you could go back to any age or time in your life, what would it be and why?

My dad and I were close but there were a lot of things we didn’t connect on and deep things was one of them. There was a time after a really rough break up when I was about 21 or 22 and my dad tried to be vulnerable with me and connect with me and I blew him off. It was a time I think he was really trying to connect and could have been really good for us and our relationship and I shut it down. If I could go back I would go to that moment, even though it really sucked.

My favorite thing about Grand Rapids is that people get together over everything. If someone said it’s grass and Goodyear tire day, everyone would show up to the park with their favorite tire and blade of grass; there are families, and the Pride Center,  and non-profits, and this organization and that one. People just get together for EVERYTHING. Despite a lot of the systematic things that can be happening here, I love that there is a strong sense of community that isn’t like any other city. Everyone seems to want to do some form of good here and there’s a million different versions of what that looks like. The city is a partnership of bougee older people and millennials and it’s all a connected community.

Why did you choose your profession?

I work for HQ, which is short for Headquarters. It’s a homeless and runaway youth center, but we do so much for than that. I wholeheartedly believe that God and that organization chose me, because LITERALLY I got a Facebook message from Andy Soper asking to use my apartment to shoot a promotional video for this new thing he was starting up. After shooting he mentioned that I should apply. I didn’t think much about it because I don’t have a social work degree or anything I just do ministry and cook. I didn’t end up applying, but later I got a text from another friend who was part of the organization telling me about an opening there that I should apply for and this time I did. I feel like it chose me to be honest and it allows me to walk out my calling on a professional level.

What was one of your most defining moments in life?

My father was a white male. He and his wife, my mother, adopted me when they were in their early 60’s. My dad was born in 1934 and he was the best damn dad. We clashed a lot about life and jobs. I was a kid who was in to Blink 182 and korn; I was into wearing black cloths and painting my nails. My dad was into working hard and fixing the car; he was a working class man. Because of that I was able to group up in this really nice neighborhood; nice white suburbia. He worked really hard for all that. A lot of our arguments came down to him trying to encourage me not to worry so much about my guitar and spending money on shows. Fast forwarding a bit, my father was diagnosed with cancer and spoiler alert – he didn’t make it, he passed away. When he was passing away, I was in Grand Rapids and my sisters and father were all in Louisiana. My sisters told me that he was going fast and that I could either come down for the funeral or they would help pay my way to get down there now. My thought was that I would rather see my dad alive. However, I was very afraid to go not because I was afraid of him dying but because I thought my father’s words to me would be “Why did you come out here? You should be working. You just got a new job.” That’s just my dad and I knew he would want me to be working, but I chose to go anyway. My dad hadn’t talked to anyone in four days and was essentially rude to everyone. I was told not to expect him to talk or anything. When we walked into his room it was quiet except for the noise of the machines that kept him alive. My sister said outloud, “Dad? Dad… ? Dad, Michael’s here to see you.” His eyes flew open and he looked around, spotted me, and lifted himself up and reached out to say “I love you.” I didn’t know what to say. In that moment everything we’d ever argued about fell away. After not talking to anyone for days he chose to talk to me, his adopted son of color. I went to his side and held his hand and told him, “Dad I want you to know I flew in to tell you goodbye. I know that you don’t care, but there are all these people in my life all over the country who are praying for you. Do you mind if I pray for you?” It was a defining moment. I knew in that moment that love was a real thing and that God was either very real or very fake. In that moment I realized that there should never be anything that keeps me from loving another person. If this man who loved me who was supposed to be culturally racist but wasn’t, how could I allow anything to keep me from loving another person. It taught me that love shouldn’t have an actual boundary. That was the best day I’ve ever had with my dad. It was the best day I’ve ever spent with another human.

If you could only keep five possessions, what would they be?

If I could make the relationship with my girlfriend tangible, I would give her a piece and I would take a piece.

A birthday card from my friend Shawn Weldon

I would make every time I have ever laughed with someone tangible and give them some and keep some.

Vagabonds- I don’t know what to do now

Neutral Milk Hotel- In Aeroplane over the sea

My own bands – Valedictorian

Liance- Bronze age of the 90’s

What I love about Roots is that it is literally open to all different types of people, all different types of belief systems, and it’s embedded in the community. I honestly believe people come here because they feel like they belong. Every time I walk in and walk up to the counter I know that staff genuinely give a damn and really care. I’ve watched the staff interact with other people and they are always engaged with customers; laughing with them and talking with them. Every customer is given the opportunity to have a conversation with staff and is honestly heard by them. You don’t get that anywhere else.