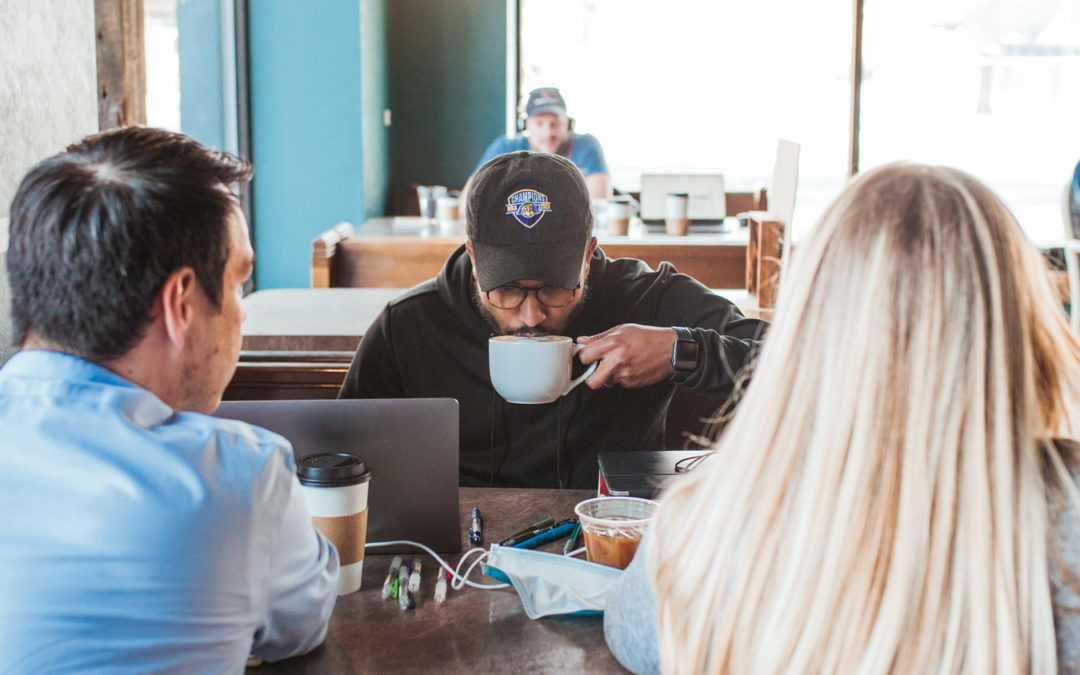 If you walk into Roots on any given weekday, chances are you’ll see three students leaned over thick textbooks with caffeine nearby. Adily, Maddie, and Tony are 3rd-year medical residents at Michigan State University College of Human Medicine.

They began coming to Roots nearly every day in July 2020. When the pandemic hit in March of 2020, they were forced to go to classes exclusively online and study at home. They soon found it to be less than ideal. Needing a place to be both productive and social, they heard about Roots from a friend and gave it a try. They soon claimed a booth in the northwest corner as their home away from home. (And also school away from school.)

Adily Elmi is focusing on internal medicine. Originally from East Africa, he immigrated to the United States 15 years ago. He had a very close friend die from a treatable illness at a young age and spoke of the lack of educational preparation and huge shortage of doctors in his hometown. This is why he decided to become a physician. “I just wanted to save as many people as I could.”

Maddie Ford is studying family medicine. Originally from the east side of the state, she couldn’t point to one specific reason why she wanted to become a doctor. “I am almost annoying at how much I want to help people.” Tony and Adily joked that she is always trying to be helpful, even to a fault. “I don’t want to see people struggle! I wanted a profession where my number one focus was to help people and I found that in medicine.” Adily added, “And she is ultra-competitive. You tell her she can’t do something and she will make it happen.”

Tony Tapia’s focus is on emergency medicine. From California, he moved to Grand Rapids for school. He spoke to multiple experiences that pushed him towards medicine. His grandmother spoke Spanish exclusively and there were not many Spanish-speaking doctors to care for her. He also did Doctors Without Walls to serve the homeless population which motivated him to pursue medicine as well. Tony mentioned that Roots reminds him of coffee shops in California; reminds him of home.

Being a medical student looks very different now than it did in a pre-Covid world.  They spoke of staring at a computer screen for 8 hours a day and not having a designated space to study or go to for classes. Roots was one of the only places they could get together to study. Maddie said, “When we are doing a lot of high-pressure, stressful work- it’s nice to be able to come here and hang out.”

When they aren’t studying to save lives, the group likes to be active. Adily and his wife, May, like to take their dog on hikes and he has gotten back into working out. Maddie and Tony laughed at this because they worked out together every day for a whole year and would invite Adily along. He never showed up. He said he prefers biking to the killer workouts Maddie comes up with. (He would like to note that you will not walk after Maddie’s leg day workout.) They also enjoy playing soccer together with other medical students on a field behind the hospital.

When I asked how else the pandemic has changed their lives, Maddie said “it’s hard to connect with people now. I hated that I couldn’t give people hugs.” Tony said that Roots is helping bring this connection back by being open again. Adily said, “I get work done here but I also feel more joyful. I can interact with people. I’m very much a people person. I refill my cup here.”

They all spoke to how friendly the staff is and how all the baristas make an effort to get to know the customers. “The brew crew is the best. They bring in very good human beings to work here. They make an effort to know your name and are invested in their customers.” They made sure to note “except Gabriel” loudly. (Pretty sure this is because he was walking by though.)

Favorite thing about yourself:
Adily- I don’t allow things to bother me for a long time. I just try to deal with it and leave it in the past.
Maddie- I choose to see the best in people
Tony- I just like to have a good time and make the best of every situation

Person or thing that can make any day better:
Maddie- My mom! She always knows what to say to make me feel better!
Tony- Watching sports with pizza and beer will always make my day better.